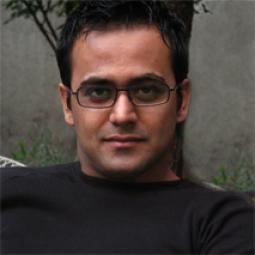 Amir Hossein Zanjani, born in Isfahan, 1980, got his MA from Tehran Art University. In fact, he and his works should be considered s a reflection of courage in a generation who disclose its courage not ostensibly but implicitly. The concept of his works can be sought in two words: Destruction and deterioration. And of course these qualities combined with a sort of capability are so polished that finally seem acceptable and beautiful. Visiting some works clarifies this point. Oxidized pipes carrying oil and whose great majesty has become an opportunity for the playing and seeking of girls seeking worthless things on the floor beneath the pipes. Houses devastated in the war in which no air of life is smelled. Wandered soldiers not so potent to attend military school, and offer their military greeting not to their superior but to a vacant view, while they do not wear enough clothes, and no sincerity is inducted from them; a type of insult to the authority whose piles seem to be deteriorating.