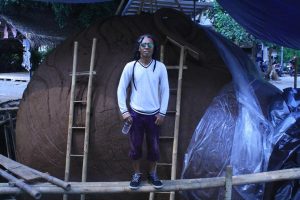 Eddi Prabandono studied Art at Institute of Art (ISI) Yogyakarta. He currently lives and works in Yogyakarta and Okinawa, Japan.

Eddi Prabandono is an artist who involves design, planning, and construction in creating his large-scale pieces. He does not work on his  pieces alone. Just like in construction projects, Eddi Prabandono involves many workers: to create designs and even work plans that need [careful] calculation. However, his pieces does not turn into merely structural things, because of the way he incorporated the evolution of languages of expressions in creating them.

Eddi Prabandono is also a commissioned artist for ART/JOG 11 Yogyakarta, Bazaar Art Jakarta, Pacific Palace – Jakarta and Living Sculpture in The Sea Program by The Marine Foundation London at Amed Under Water Gallery – Bali and today at his work ( After Party )was presented at Venice Biennale 2015 .