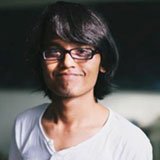 Faizal Suhif was born in 1984 in Johor Bahru.

He specialises in charcoal drawing and print making and has won various awards such as the Excellent Master Award UiTM, the Honourable Mention, NBC 1st Screen Print Biennale in Japan and the UOB Painting of the Year Bronze Award in 2015. Faizal has been exhibiting in Malaysia and abroad (Dakha, Tokyo, Berlin Singapore,Jakarta,Istanbul) since 2004.

He gets his inspiration through his admiration of nature. Faizal describes his creative process and his tarvels saying: “I am fascinated by the interplay of order and randomness that is found where man and nature meet” he said. “I have depicted isolated areas of scene which seem floating, silent, dark and gloomy… It was an interesting journey because each place gives a different marking…I [am] left with some exquisite marks that are a curious mixture of planning and randomness which something I feels underlies so much of my work.”

His first solo exhibition will be at Vallette Gallery in May 2016.