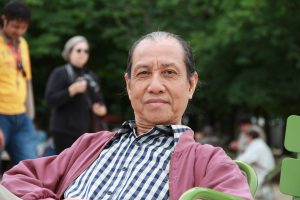 Loo Foh Sang was born in Gambang, Pahang in 1944. After studying at the Nanyang Academy of Fine Arts in Singapore (1963-1965), Loo furthered his education at the Ecole Nationel Superieure des Beaux in Paris in 1966. After graduation, he remained there and was accepted to study printmaking under the tutelage of Stanley William Hayter, the English printmaker and painter who founded Atelier 17, widely known as the most influential print workshop of the 20th century.

From 1996 onwards, Loo has organised 3 international Contemporary Printmaking Art Shows in Malaysia. In 2000, he was in the Jury Panel of the 3rd International Triennial of Graphic Arts, Macedonia. In the same year, he received honourable mention and became an “in-house artist“ at the Romania Art Museum. In 2009, he was awarded the Asia-Pacific Art Golden Award. And in the following year, he received the global Golden Brand Award.

Since 1963 he has held 25 solo exhibitions locally as well as abroad. He has also participated in more than 50 print exhibitions all over the world. In his 52 years of pursuit of art, his works include oil paintings, ink paintings, prints, sketches etc. Through the variety of his artworks, we can appreciate his joy, anger, sadness, happiness, and also the truth, goodness and beauty from his artistic expressions.