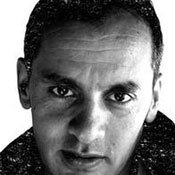 Raed Bawayah was hardly out of his teens when he seemed the equal of the great photographers. Born in the village of Qutanna, near Ramallah, he has focused on his home village in a manifesto as political as it is social. He describes the way children are shut in there, not daring to leave the yard they sometimes share with the family goat, the white rabbit and an attentive, protective mother. Occasionally, for a few seconds, they venture outside to play among the olive trees and cypresses, but always in a space that is very – excessively – restricted.

The same issue is explored in his study of Palestinian workers forced by conflict and economics into exile in Israel, where they come together during periods of rest or pseudo-solitude in cramped, often shameful quarters where the sole choice is withdrawal into oneself.

Most moving of all – and equal to Depardon’s San Clemente – is the series discreetly titled Hospital: gestures that are elusive, furtive, tender – gestures of fraternity often and of prayer, sometimes.

There are no material lacks in this enclosed world, but we feel a solitude and psychological wretchedness that reflect the moral isolation of a people so to speak made prisoner in its own country.

The most recent project, commissioned by the French Ministry of Culture, examines cultural diversity. Raed Bawayah’s tactic was to slip into the daily life of Gypsies, those tight communities so often ignored and even rejected, living in the interstices and withdrawn into themselves and their specific culture.

Too often the caravan appears as the symbol of their isolation; yet it protects them too, before they set off on the road again. In a few sparely structured images Raed underscores the tenderness that unites clan members, their pride in their traditions and the melancholy of having to move on.

With great delicacy, compassion and discretion, Raed Bawayah subtly portrays a daily life very close to his own, and the situation of communities or peoples who have no choice but to submit to imposed isolation.